What are nature and wildlife in North Cyprus?

Cyprus’ wildlife is not particularly diverse in terms of species. The mouflon, an endemic Cypriot mountain sheep, and wild donkeys that live in the Kyrenia highlands and Karpaz area are particularly interesting among the island’s uncommon species. The government has made it illegal to hunt these animals in recent years. Foxes and hares live in the woodland zone of the highlands. Many different species of lizards, turtles, and snakes can be found in the lowlands near the shore and on the mountain slopes. Many of them may be seen in the remains of ancient cities such as Salamis. Chameleons live in the dense jungle along the coast. Many amphibians, particularly tree frogs, can be found in Cyprus.

North Cyprus is home to a diverse range of exotic fauna, with some fascinating species visible throughout the year. Hedgehogs, foxes, and tortoises are also seen in North Cyprus, however, the latter are not native to the island and were likely brought from Turkey and left free to explore the countryside. There are many butterflies, as well as mammal, reptile, and sea species, and samples of nature can be found throughout the mountains and along with the unpopulated coastal areas. North Cyprus is also known for its wild flowers, particularly rare orchids, which draw visitors from around the world.

Any holiday in North Cyprus revolves around nature. From the breathtaking panoramic views to the wildlife, beaches, and scenery, there is something for everyone.

North Cyprus is an ideal location for viewing a wide variety of bird species. There are 347 in all, the majority of which are in transit, 46 of which are native to North Cyprus, and seven of which are completely unique to the region. You can see flocks of birds on their migratory route twice a year, which is a lovely and unusual sight.

Northward migration occurs from March to May, whereas southern migration occurs from August to October. As a result, North Cyprus is a popular destination for bird watching. There are several vantage points from which to enjoy the best views. The alluring sandy strip of the Karpas peninsula, where much unusual wildlife hides, is one of them. You might observe orioles and bee-eaters on the island, as well as rollers and Audouin’s gulls if you explore the peninsula further.

The Kyrenia Mountains are also a great place to watch birds since they surround you with scenery that makes you feel completely lost in nature and puts you in a good position to witness the birds that soar through the area. Kantara castle is not just a remarkable historical site, but it also provides opportunities to see birds like the charismatically named spectacled warbler or the local wheatear.

Since 1989, the North Cyprus Society for the Protection of Species (NCSPB) has collaborated with various environmental organizations, including the local Greenpeace, to help safeguard the island’s few indigenous birds. Whether or not you enjoy bird watching, you will be amazed by the views they produce and the spark they bring to the ambiance if you have the opportunity to witness even a few of the many that spread their wings throughout the island.

There are fungus in North Cyprus…

The bulk of fungi that we are familiar with take the form of mushrooms (though truffles are also fungi), and while most are delightful and safe to eat, other varieties are inedible and toxic. It takes a lot of mushroom expertise to tell the difference between the two, but there is one thing you do not have to worry about: how fantastic they taste when they have been professionally prepared and cooked by a traditional Cypriot chef. There are 109 different kinds of mushrooms found in North Cyprus, with many more suspected to exist but not yet investigated.

Late May to August is the ideal time of year to see turtles in North Cyprus, as this is when they are nesting. You might be able to spot several green turtle mating pairs from May to early June in particular. Nests normally hatch at night, and this usually happens between the months of July and September. Alagadi Beach, located about 10 miles east of Kyrenia, is a favorite area for loggerhead and green turtle sightings. It’s also a great place to visit for a relaxed day trip because guests can simply rest on the sand and soak up some sun.

The Golden Beach on the Karpas Peninsula is another great place to see turtles, with a pleasant breeze and a clean, paradise-like atmosphere. There are also various eateries around where you may grab a bite to eat. Excursions to see turtles are frequently organized, and you can always inquire about them at your resort or ask one of our travel consultants for more information. Because this is a popular attraction, it is always better to reserve ahead of time. 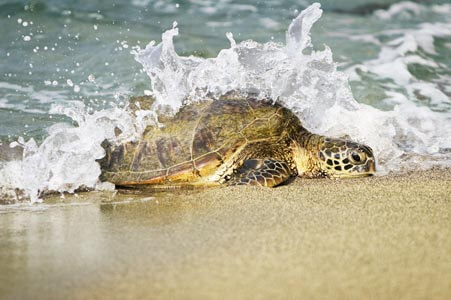 Marine turtle conservation is crucial in North Cyprus since they are an endangered species. The North Cyprus-based Society for the Protection of Turtles (SPOT) dispatched a team of volunteers to undertake assessments on the area’s nesting beaches in 1992. North Cyprus has successfully protected and conserved the turtle species since then, with three conservation groups continuing these methods on breeding beaches. The major goal of conservation is to safeguard vulnerable turtle eggs from predatory creatures such as foxes and dogs. A wire screen is used to cover the nest space in this manner.

If the eggs are put too close to the sea, the nests can be re-located, but this is a difficult maneuver that should only be attempted in severe situations. The turtle beaches have been well-protected from mass development, allowing visitors to experience them in their natural state. There is also a turtle code, which states that visitors should not handle turtles, use strong lighting, and maintain the environment safe and clean while they are there.

Forests of pines North Cyprus is known for its stunning pine woods, which are densely forested and soar into the pure blue sky. The Pines, which stand among Cypress trees, are evergreen, making walking, cycling, or driving through the region ideal throughout the year. Maquis bush Maquis bushes may sound exotic, but they are only the basic green scrub that adorns the mountain and hillside sides of Northern Cyprus, making the view there both stunning from afar and up close. The modest Maquis bush is essential in achieving the pristine perfection that North Cyprus is capable of conveying, and it can survive the sun that Cyprus enjoys thanks to its robust character.

The olive tree has been an important source of revenue for the Cypriot people for hundreds of years, as the fruit and subsequent oil have been major exports. Olive oil, rather than the modest black or green olive, appears to be more popular in today’s market, as the oil is thought to provide health benefits (not to mention makes a fantastic salad dressing).

Unfortunately, the number of olive trees in North Cyprus has been declining in recent decades due to building development, but they are being conserved by societies that want to maintain the beauty and heritage of an olive tree. Tree of Carob Carob warehouses stand along the shores around historic harbours as a reminder of how popular and profitable this tree used to be, known as black gold for the wealth it generated for Cyprus for hundreds of years.

Carob is a long black pod that was frequently utilized in animal feed while it was still on the tree. Carob is now made into an oil that is available in health food stores, as well as a sweet black syrup that may be used in the same way as caramel. And, strangely enough, carob is a very popular ingredient in Western Europe because of its sweet flavor and nutritional benefits, making it an excellent substitute for chocolate in dog treats!

North Cyprus is home to over twenty species of wild flowers that are found nowhere else on the planet, and if you want to view them all without missing them in the wild, visit the Herbarium in Alevkaya near Kyrenia! Orchids In North Cyprus, there are around 30 different types of orchids, including bee orchids, which can be found in the wild in a variety of settings. There are excursions offered to show you as many species as possible, including some that are exceedingly uncommon and exotic, if you’re a serious botanist or simply a flower enthusiast who doesn’t want to miss a single orchid.

There are many other wild flowers in North Cyprus, such as cyclamens, narcissi, and crocuses, each as lovely as the last, and they are scattered throughout the region, so if you go for a casual walk, a serious hike, cycle, or drive, you should see at least one as they adorn the mountains, hills, and fields that surround the towns and villages. The most popular trips are orchid tours, but there are also general wildflower tours so that everyone may appreciate the beauty of these endemic plants.

You can read our previous blog post about animal hunting in North Cyprus.

What do you know about Varosha (Maraş) North Cyprus? Varosha, once a jewel on Cyprus's golden...
Continue reading

Reasons why North Cyprus is a must-visit destination in spring North Cyprus has a lengthy and...
Continue reading

How to open a bank account in North Cyprus North Cyprus' banking system is based on the Turkish...
Continue reading

What are the reasons to live in North Cyprus?

Please enter your username or email address. You will receive a link to create a new password via email.